Smart bags and tags: Are they smart enough?

Anyone who has lost a bag on a flight will tell you it starts off as a terrible inconvenience and often ends up as a costly experience. Airline companies typically apply the same scale of compensation for a bag irrespective of the nature and monetary or sentimental value of its contents. Claims are made based on the weight of what was lost, and comes with a large number of conditions attached to decide eligibility.

In other words, it doesn't really make a difference to an airline company what was in the lost baggage, just like it doesn't matter to a passenger how exactly his/her bag was lost. That brings us to the cliché: Prevention is better than cure! 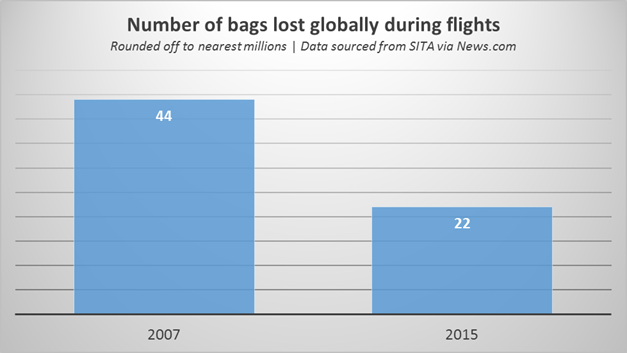 There is no question that airline companies are getting better and better at this goal of delivering baggage safely to the right destination. The rate of bags lost per 1000 passengers was 18.8 in 2007, from which it has dropped to just 6.5 in 2015 as per a SITA report quoted on News.com. Given the massive volumes of passengers travelling each year, the numbers are still high enough to call for more intense scrutiny of the baggage handling process. So it wouldn't be fair to see them as mere statistics. Each bag is of consequence to an individual traveler at the very least and often much more than that. Loss of a bag may deprive the traveler of the chance to meet the real goal of the journey! Here is an approximate distribution of where the bags are lost, partially based on the SITA report quoted by Fox News 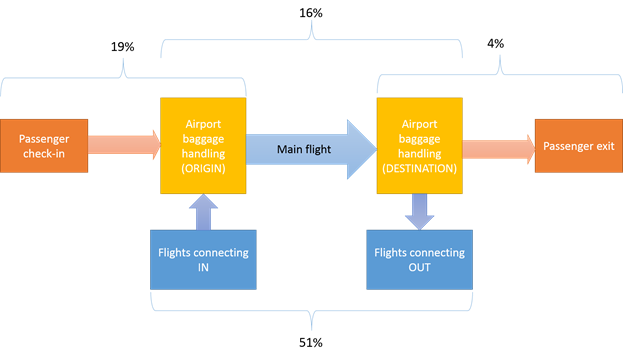 Clearly the objective of any system must be to eliminate the chance of baggage being misplaced, with a compromise being a reduction in this chance. The process must be allowed to move from one phase to another only if the baggage associated with each checked-in passenger has reached where it should. What would the terms be, from an implementation perspective?

All pieces of luggage checked in by passengers (whether in this main flight or on a connection) must be accounted for in the cargo hold of the aircraft. At a macro level, this means the number of bags in the hold must be equal to the total number that came in from all sources. At a micro level, we may check whether it is the exact same pieces – each identifiable to a specific passenger and vice versa without any misses

This means there must be a tangible connection between each passenger and his/her bags (other than a common identification code). It must go beyond current smart tags that let a passenger track the whereabouts of a bag. What is missing is the consequence of an anomaly being detected. That is, the same technology may be deployed to "connect" the passenger with a smart boarding pass and the bag (or bags) with smart tags; but what must happen if one of the links in the connection is missing? What happens when a passenger discovers from his smart apps that his bag isn't where it should be? Or, what happens when the ground staff discover that a smart-tagged bag in the cargo hold doesn't have a corresponding smart boarding pass linked to it? 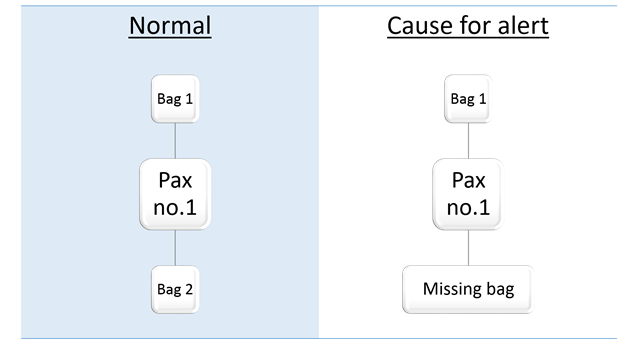 What happens if a smart-tagged bag goes missing?

Maybe a Smart Contract system can be implemented to prevent the aircraft from getting clearance in case of such an anomaly? Of course, in comparison with how much an airline stands to lose for a delay in take off, something like lost baggage may seem insignificant. But at least it will bring in accountability. Also, a passenger will be aware of the fact well in advance that his bag is not going to appear on the baggage claim belt. Further, action will be well in progress by the time to find the missing piece and restore it to the rightful destination and owner.

So merely having smart tags isn't going to cut it, unless the system on the whole is sufficiently smart. Granted, there is a real cost involved in implementing this system. But it has been consistently shown through IATA surveys that passengers demand better handling and information of their baggage. The ROI in customer satisfaction is limitless!