Cargo Can't Talk (Or Can They?)

RKN1212ZZ responds "coolcontainer ready and receiving, state your command".
Pat comes the reply "coolcontainer status report?"
A pause, RKN1212ZZ checks her bearings - she'd made the long 10 hour intercontinental flight and had just checked in to the cool and secure confines of the special cargo facility. "Temperature at 10o Celsius, within tolerance of 8o to 12o Celsius; Battery 60%; GPS indicates position within acceptable variance of planned itinerary; Expecting delivery by 14:30 local time to Acme Pharma Co."

The line pauses for a brief second and again comes live "Acknowledged, service level standards are in order, your pickup truck is on its way, expecting arrival at dock by 13:45, all clearances are OK, all pending charges are paid...you are all set coolcontainer, have a nice day".

If only cargo could talk - that would have been the easiest conversation in the air cargo supply chain!! Unfortunately, cargo doesn't talk - at least, not yet.

If you thought this was science fiction, it is actually not - the technology parts for this was in place a long time back:
Which leads us to the fundamental question: Why doesn't cargo talk?

If you take the history of computing, there have been "megatrends" that have shaped the flow of events, which has led us to where we stand today. Starting with the simplest revelation that instructions could be created to make a machine perform a given set of functions in a certain sequence, card readers that "read" these instructions from punched holes, invention of the binary code and eventually the computer... and in more recent times, things like cloud computing, AI, Internet of Things (IoT) and so on.
However, none of these technological breakthroughs have transcended the business process behind the seemingly high tech business of aviation that drives our heroine's - RKN1212ZZ's - journey across the globe. The question is again - Why?

To know the reason, we need to go back to the process, and the maze of IT capabilities that support the journey of RKN1212ZZ from one part of the globe to the other. If you take each process involved in the journey, it works perfectly:
However, take a step back and the real picture begins to emerge.


Scene 1 - The Start, With A Promise Made

The sales booking system of the airline that was used to secure the position for RKN1212ZZ does exactly and only that - it sets the price of the transaction, it checks and confirms availability of a ULD positon for her and after the transaction is complete, the forwarder (probably) even gets a booking confirmation via email. The sales system however, has no idea (or interest) of the unique handling needs of our rather special heroine - for example, the temperature tolerance of the delicate pharma shipment that is within the container or the timeline for her journey and the promise made to the forwarder who made that booking - all of this remains in the minds of the people involved in the transaction (and maybe in poor RKN1212ZZ's voiceless soul).

Now, as RKN1212ZZ's journey begins, she is brought into the terminal at the outbound GHA's facility. For the GHA, she is among the dozens of similar looking containers that have turned up at their facility on that particular day. They have standard procedures for handling these, but none of the story so far (what transpired in the sales process with the carrier sales system) has been provided to the GHA's IT platform.

Hence, the GHA IT system does not know about RKN1212ZZ's unique temperature requirements, or the fact that the batteries of her cooling unit are near exhausted at that time. Somehow, someone checks the paperwork and saves the day and plugs her into a charging port, preventing a disaster. Neither the carrier that promised her safe passage, nor the GHA in whose caring hands she was to be safe and secure have so far been able to guarantee a smooth journey for our heroine.

It is a stormy day at the airport. RKN1212ZZ's flight is sitting on the tarmac, waiting for ATC to clear it for take-off. It is already one hour past the schedule departure time and it is probably going to be further delayed. Eventually the flight does take off, a full 90 minutes late. It has already cut into the 180-minute time available for RKN1212ZZ to make it in time for her connecting flight. She is not going to make it unless someone knows that she needs to be taken quickly to the connecting flight.

Here again, the system fails her. The airline sales system knows what flight she has to connect to, the flight operations system of the airline knows that the outbound flight is delayed - still, nobody knows yet that the VIP on board needs special attention - even when there is still 10 whole hours for the system to make necessary arrangements. She doesn't know yet, but RKN1212ZZ's journey is already in peril!!

The flight finally lands at the transit airport. The pilots (and favourable weather) have shaved off 20 minutes from the delay, but still ends up eating up 70 minutes from the time available for RKN1212ZZ to connect to the flight to her final destination.

After about 60 minutes, the hub handling unit identifies the problem - and all hell breaks loose. The VIP cargo is wheeled away double speed to the departing flight gate, but they don't make it past the terminal gates. The flight has already pushed back and is on its way to the final destination, leaving poor RKN1212ZZ in the rain and without a confirmed connection flight.


The Villain is Data - or Rather, The Lack of It

Alas, this is not an over dramatization. The air cargo supply chain that works so well in isolation completely fails to deliver at the network level. Air Cargo processes have not been designed for network performance, and as a result, IT systems and information sharing in the industry have simply not been designed to fulfil the big picture.

This "silo'ed" thinking process has resulted in a process where critical pieces of information are either not captured early in the lifecycle (for example, SLAs beyond basic milestones - such as temperature) or are not shared across parties (for example, monitoring of batteries at regular intervals by third party handing providers). This has hence resulted in a scenario where even if RKN1212ZZ was capable of measuring her own temperature or battery levels using IoT sensors, the information simply does not get either recorded or shared across multiple IT systems - and hence would have had no effect whatsoever on the outcome of this tragic story.

So, coming back to the original question - Why can't cargo talk?, and more importantly, How do we get them to talk?

The need is for cargo supply chain partners to look at processes and technology, specifically IT systems in a holistic sense, asking questions like how can we get our IT systems and business processes aligned so that even if the transactions are happening across different business units within the enterprise (for example, sales and handling in an airline) or across different service providers (for example, carriers and GHAs), critical information is not lost in translation.

We can think of three ways to address this:

IBS Software has taken the learnings from its vast experience with leading carriers and ground handling companies around the world to design IT systems that cater to these requirements:

It is in fact not impossible or even difficult to foresee a future where cargo does speak for itself and finds its own voice – the technology exists and practical solutions are available. Even when RKN1212ZZ might not have such a glamourous tete-a-tete with other systems as in the opening sequence, she can afford to have a voice and more importantly, can certainly expect her voice to be heard! 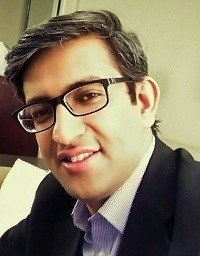 Radhesh Menon heads product management and strategy for IBS Software's offerings in the Airline Cargo Solutions line of business. In this capacity, he is responsible for short and long term product goals, competitive benchmarking, product roadmap and innovation practice. He is also responsible for running the product community model. He has over 16 years of experience in the air cargo and logistics business systems in air cargo, industry best practices and new industry initiatives.

Radhesh played a pivotal role in conceptualizing and developing the blueprints for IBS' new generation product line for air cargo management. He was instrumental in setting up and running the IBS Core Group of Influence (CGI) – a partnership of IBS and several industry leading carriers for the conceptualization of IBS' new generation cargo system - iCargo.