At the recently concluded IBS Travel Hackathon 2018 – Student Edition, some of us got the chance to interact with young engineers who were keen to showcase their innovation and technical acumen in a continuous 26 hour coding challenge. How wrong we would be to assume that innovation comes from in-depth knowledge and a firm grip on the nitty gritties of whatever problem one is grappling with. Sometimes, the best ideas arise from gaps in understanding and an earnest effort to fill in the blanks proactively!

Spending a day with the budding technologists of tomorrow comes with a bunch of advantages. Fresh eyes on a problem helps you get a fresh perspective of what a problem is really composed of. Answering their questions makes you think of things in totally new ways and come up with previously unseen solutions; they may see problems in your thinking that you never expected! But above all, it is a reality check - not everything will be perfect for the untrained technologist, but having such an up close look into their thinking lets you see the errors in thinking/perceptions and plan to fix them before putting them on a real world stage. 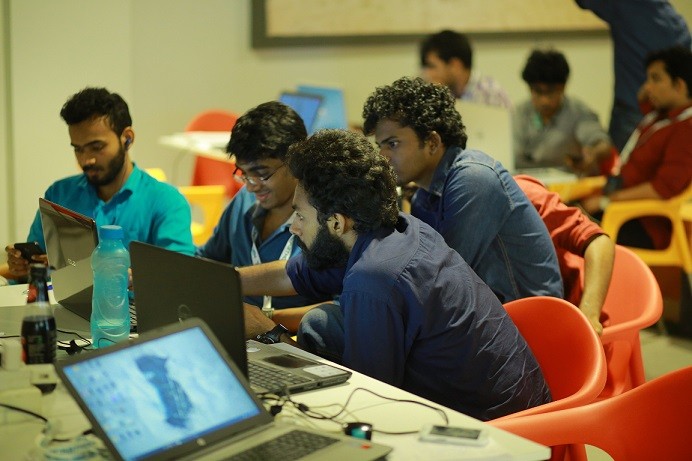 The top three ideas, which earned a total cash prize of INR 150,000 between them, showed a great deal of potential independently; but more interesting was the synergistic power that could come from integrating them in a meaningful manner. Let's just assume the youngsters were pressed for time and lacked sufficient exposure to tap into the possibilities.

The winning idea, an app named Illusion, touched upon Augmented Reality, whereby rich visual content would be delivered to a customer who sought to get a feel of the destination he/she was planning to visit, or to get a peek at what an offering on the in-flight menu would really look like. The runners up – who named their app Batuta after the famed traveller - sought to enhance the experience of a traveller in search of offbeat destinations by providing an on-demand hyper-localized itinerary based on your preferences. The advantage of an integrated model is obvious.

Earlier in this blog, we had touched upon how rich content and the resultant experiential selling is able to boost sales by as much as 30% in the travel industry. The technology is obviously feasible, and all we need is a real world, relevant use case. Batuta is clearly a strong contender to provide that. On the other hand, some of the ideas stoked our interest for a very different reason. There were earnest attempts by some of the technologists-in-making to deploy block chains into the very core of their prototypes. Not all the attempts would pass the "necessity of innovation" test, but this was evidence to us that this group was doing their homework in terms of researching what's going on in the world today!

Granted, some of the ideas which were presented would sound familiar to those who work in various sectors of the industry. But taking into account the fact that many of these budding engineers thought them up and implemented them (in some form) under strict time pressures despite a clear lack of exposure to the industry must make us wonder – Does our approach to problem solving need some adjustment? As you can read in this blog post Need experiences, will travel: Why millennials take to the skies, millennials have a growing influence on the travel market on the demand side, which means it is essential to factor them into the supply side as well.

The cream of this crop of budding entrepreneurs (the winners of the Student Edition of the IBS Hackathon) will soon be showcasing their innovative talents at the IATA NDC Hackathon. We are listening!