Revenue Management is considered the backbone of the aviation industry. Predicting the right demand, timing, and pricing are responsibilities of the revenue management system. Technology has brought radical changes in the way revenue is realized by the airline industry. However, technology has a lot more to offer compared to what is being implemented. In this blog, Kelwin Kuriachan, Senior Principal Product Consultant, talks about the future scope of technology and its role in revenue management, the challenges involved in revenue management, and how AI can help with continuous pricing.

What are some of the challenges faced in airline Revenue Management (RM)?

There are many challenges in airline revenue management, from its deep-rooted association with legacy systems and processes to the manual interventions required by analysts. However, before diving into these challenges, I think it is important to understand the mission objective of the revenue management team at the airline.

The mission of this team is to find the optimal price for an airline ticket with which the airline is able to operate and maximize its profits. Ideally, an optimal price of a ticket is a sum of the following components -

There are challenges that exist in deriving each of these components.

According to you, what is the way out of this legacy problem of static price points? Do you think continuous pricing is the way forward?

Yes, the airlines have to move away from the concept of static price points to a continuous one gradually. Since the current RM systems and processes are deep-rooted in legacy, it is not going to be an easy path. The transition will be slow and an airline has to take a step-by-step approach. Continuous pricing has been in the airline industry's spotlight for all the right reasons. Almost everyone in the airline industry understands that continuous pricing is not about generating new revenue but rather about reducing the lost revenue through greater efficiencies. 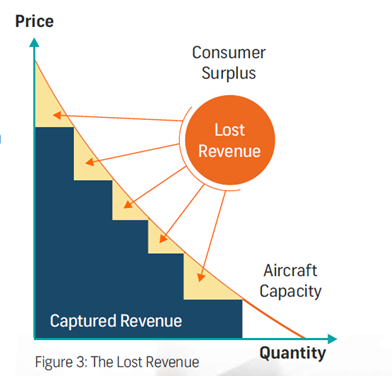 Recent advances in artificial intelligence and machine learning have paved the way for a future in which each product – whether a ticket, an ancillary, or even a bundle can be priced optimally, in real-time. These enable airlines to make better pricing decisions by considering multiple parameters to accurately estimate current demand as well as a specific passenger's willingness to pay. Pilot implementations across various airlines have demonstrated that this methodology results in revenue increases, explaining why many airlines are prioritizing continuous pricing.

Why AI for continuous pricing?

Currently, airlines use RBDs and fare basis codes to segment demand, which only allows a limited and insufficient number of static price points in a market. A fare basis code consists of up to eight characters and contains information such as fare class, season, weekend/weekday, advance purchase, minimum stay, point of sale, and so on. This is used to categorize customers into various demand segments. However, due to the limitations of manually managing many combinations, airlines cannot fully utilize these. Most network airlines work with a maximum of three hundred to four hundred fare basis code entries for a given origin and destination pair, whereas the possible segmentations can be much higher, reaching hundreds of thousands or even millions in some cases. Current systems are incapable of handling such a large number of segmentations. Even if systems were capable of doing so, managing such volumes would be impossible for humans. This is where Artificial Intelligence (AI), or more specifically, Machine Learning (ML), can come in handy.

ML can identify demand patterns in historical data and, using probability, determine the demand segment for a booking. This capability is used to calculate price points based on demand segments without the use of complex rules such as footnotes and fare basis codes. This enables airlines to create virtually infinite price points, breaking free from existing constraints. Furthermore, better segmentation can be achieved with ML, even with existing data sources, before bringing in other external data sources. True continuous pricing can only be achieved by calculating fares in real-time as and when a booking request is made, as this is the only method capable of accurately capturing the current demand context. Once an airline has achieved real-time price determination capabilities, implementing self-learning AI algorithms help optimize fares generated by the system, so that revenue is maximized based on conversions.

Further, in today's RM teams, the majority of the work done by analysts is manual, repetitive, and time-consuming. They have to go through a number of reports and rules in order to determine the current fare or inventory levels or to determine the various forecasts. Some of these processes are automated in existing revenue management systems but the complexity of such rules and their maintenance itself invites additional manual work. Leveraging AI technology to better automate these routine tasks is a major use case for an airline starting to implement continuous pricing.

Challenges and Trends Of Aviation In Brazil