Blockchain: How to explain it to a 10 year old

"A blockchain is a distributed ledger database that maintains a continuously-growing list of transactions in the form of ordered records called blocks."
-Wikipedia

"If you can't explain it to a 10 year old, you don't know it yourself"
– Albert Einstein (attributed, but disputed)

Clearly, not a lot of people without a substantial background in technology can make much sense from the Wikipedia definition of blockchains. Any technologist who wants to explain the concept to a business leader or an investor who isn't very tech savvy would require a simplified version. With a nod to Einstein, who supposedly and inadvertently created a framework for such simplification, this is best done by way of a story as below: 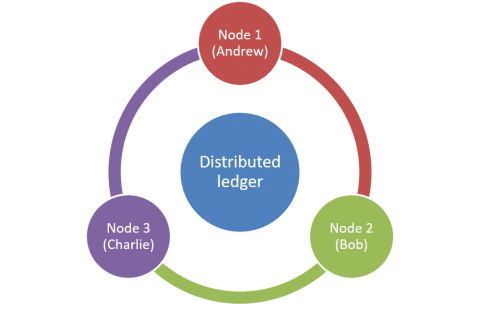 Andrew runs an ice-cream shop in a small town. Bob, who has a hot dog cart, has just deposited all his earnings of the day into the bank and is on his way back home. He looks longingly at the ice cream cart, well knowing he has no money left in his pocket. Andrew notices this, and offers him an ice cream on credit. Bob offers him two hot dogs in return but Andrew declines, because he doesn't eat meat.

"This sundae is the last one I have. If you take it, I can close up and go home. Just pay me tomorrow", he tells Bob with a smile and notes down the transaction in his little account book. Bob gratefully accepts the ice cream and digs into it. He too makes a note in his own account book that he owes Andrew a sum of $8 for the ice cream sundae and sits down on a bench by the road to enjoy the ice-cream. The ice-cream shop is about to close for the day, when Charlie the milkman rushes in and demands his week's invoice of $100 for milk be settled immediately. Andrew hands over $92, which was all the cash he had on him. Charlie shakes his head, "Andrew, I need the $8 now. This $92 goes straight to my creditors and that leaves me only that $8 for getting something to eat." He turns to Bob and points at his hot dog cart. You got any hot dogs left? I'm starving!"

Bob jumps up in glee, "Oh yes. Shall I give you two? That'll be $8 please." Charlie shakes his head again, "Sorry, I don't have any money left. This cash goes straight to my creditor who is waiting across the road. But they do look delicious!" Bob quickly runs over to Charlie and hands him the two hot dogs, before explaining "That's fine. I owe Andrew $8, which is exactly what he owes you, and what you need to pay for these two hot dogs. Enjoy!" Andrew and Bob both fish out their notebooks. Bob strikes off the record of buying the ice cream sundae, while Andrew is more disciplined – he writes "Received" neatly, in small letters next to his record of making that sale on credit. Charlie was busy digging into his hot dog to notice all this. With a full stomach and a handful of cash, he darts back across the road to settle his other debt with his creditor.

The above story is about transactions in a mini-economy of three people (if you don't include the creditor, who never actually makes an appearance) in a small ice cream shop. Since Bob was there at the right time when the transaction between Andrew and Charlie took place, he was able to help them settle it effectively without any delay. Otherwise, the only record for their transaction was their private notebook entries, and Charlie would never be aware of their business relationship. Not one, but three transactions would have ended up going unsettled on that day. Instead, on this occasion, all three debts were settled quickly without any cash changing hands.

Now imagine if instead of just three people and three transactions, this was a series of one hundred thousand transactions between twenty thousand people. That would take a lot of coincidences to be settled on the fly, especially if there wasn't enough hard cash to be spread around. And a handful of notebooks (ledgers) wouldn't be sufficient. What that situation would have demanded is one huge ledger to record all those transactions; it would have to be secure, easily accessible and dynamically updated to ensure it is continually accurate. After all, in such a large economy we cannot assume that everyone trusts each other!

This is where the blockchain comes in. At its simplest, blockchain is a distributed ledger that records transactions in the form of blocks, so arranged and linked to each other in such a way that no modification or reordering is possible. The adjective 'distributed' signifies that this ledger is not stored in a single place – instead, once a record originates somewhere, as it did in Andrew's notebook, it is immediately replicated everywhere on the network so as to inform everyone concerned that this transaction took place. Even if Bob wasn't present to tell Charlie about his own debt to Andrew, Charlie could have found out about it if it was recorded on a blockchain. A transaction once entered on a blockchain cannot be deleted or modified – which is akin to saying Andrew can never strike off the debt from his book. He can, however, add another transaction that pays off the debt, thus maintaining a zero balance. The history is never erased, especially because it is already replicated and presented to all other participants on the network. At the same time, since each and every transaction becomes a record on the blockchain, there is no danger of any party trying to collect on a debt more than once by exploiting lack of information. If Andrew had paid off Charlie's debt immediately, then Bob would know instantly, thus preventing any fraudulent attempt by Charlie to get paid twice!

While they have been in existence for a couple of decades or more now, blockchains gained popularity in recent times with the advent of Bitcoin, which is a virtual currency that can actually be used in real world business transactions such as buying and selling. Partly on account of this history, most people still consider blockchains to be an underlying technology for banking and finance in the modern age. However, as different industries recognize the potential of bitcoin in their business, new and more practical use cases are emerging. It is undoubtedly one of the buzzwords of the decade, and possibly the innovation of the century – so pay attention to the Blockchain!

Cool to have a concept explained! You have done justice to Einstein ?